Just thought I will post some photos I took a while back.  I haven’t done much with my camera in the past week mainly because I have been trying to pick up some reading and trying to catch up with my sleeping.

I thought it was easy to take photos of the moon. But as it turns out, it is harder than I originally thought.  If you use the camera auto exposure setting, you will most likely get a photo that looks like the photo above. You will see the moon like a headlight of a car, it would be bright but you loose all the details. Reason? Your camera evaluates the average exposure of the field of view and decides the sky is a bit dark.  Therefore it sets the exposure to capture as much light as it can from the sky.  But since the moon is a much brighter light source, it will become over exposed and you will loose its details.  The photo taken above with F7.1, 15s exposure and ISO100 setting using the EF 70-200 f4L lens. It might be better to switch the camera to manual mode and start experimenting with the shutter speed and aperture settings. After playing around a bit, I got the above photo. As you see, the sky appears to be totally dark and the clouds around the moon disappear. I get much better detail of the moon surface and the over exposure “light flooding” around the moon is gone.  The photo was taken with F7.1, 1/100s exposure and ISO100 setting using the EF 70-200 f4L lens. What a difference from 15 seconds to 1/100 seconds!  The first photo was overexposed by 1,500 times! On a different day, we had some rain and some sun.  And when you mix them together, you get rainbows!  It was a big rainbow and the photo does not do justice of how awesome it looked.  There was actually a second one in parallel to its right. This photo was taken with F13.0, 1/250s and ISO800 setting using the EF-S 10-22mm f3.5 lens.

Ok that’s it for today, got to get some sleep, too. 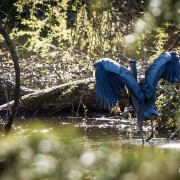 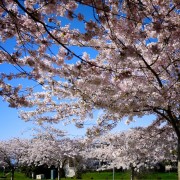 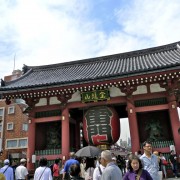